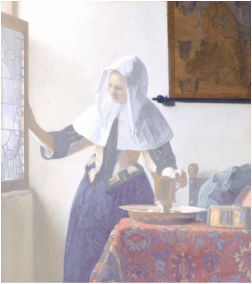 A wall map with the same colors and the same size, I have now in my possession! Thank you to everyone who made this possible!
"James Welu, who has made a careful and systematic study of the cards on the background of his paintings has discovered that they are amazingly true to the published original maps, even though week the painter occasionally from his examples, because the decorative effect on the composition. Even the mermaids, sea monsters and sailing ships that populate the oceans are properly represented in Vermeer's paintings.
Welu noted that Nicolaes Visscher map in the background of "The Art of Painting" in Vienna shows the northern and the southern provinces of the Netherlands as if they still formed a political unity and the Republic had acquired a sovereign existence. We will never know whether the crease in the middle of the card, which makes a symbolic separation between the Catholic and the Protestant area deliberately was made by Vermeer or was actually visible on the displayed map.
...
Yet Vermeer never painterly effect forgotten that he was trying to achieve by placing his globes and maps on the background of his compositions. The same map will look very different to "Officer and Laughing Girl" and "Woman Reading in blue. At first painting is painted sky blue country; the second is that country in harmony with the dull ocher of the entire surface. As a large part of the map was painted in the second painting blue, blue jacket of the woman would certainly have disappeared in the background and her stature would have lost a lot of volume and monumentality. "
(Source: John Michael Mondigs - Vermeer and his environment, translated by Hans Bronkhorst)​
This I also recently read more about Vermeer's maps:

"...
And then there are the maps. This stuck in a half-dozen Vermeer on the wall and forms as an emblem of a larger area -or it a state, country or continent is- an additional window opening in the interior facing inward. Samuel van Hoogstraten expressed his enthusiasm for maps in his Inleyding: How beautiful is a good map, which one sees the world as from another world, thanks to the art of drawing. " Metsu, De Hooch, Terborch and beyond 'the usual suspects' decorated their interiors with cards. Location maps were popular in affluent households, it was fun to watch them, educational and moreover their owners could make a good impression with their interest in geography and politics, and even with their patriotism. Most maps Vermeer be recognized. A map of Holland and West Friesland, which is almost entirely seen in "Officer and Laughing Girl 'and partly in' Woman in Blue Reading a Letter" was created by cartographer Balthasar Floris Son Berckenrode and edited by Willem Janszoon Blaeu. In 1661, the map was about forty years old. The text below the edge of the card glorifies the steadfastness of the Dutch and the land that they knew to preserve. In the first painting Vermeer suggested the map might be that the soldier had something to do with the preservation of the provinces that have seen. In the latter he perhaps wanted to give a hint that the woman's letter was written by someone "out there" outside. Map with all Seven Provinces in 'the Painter Art "was created by Nicolaes Jansz Visscher and in 1636 issued when the northern and southern provinces, at least in theory, were still together (the formal separation took place in 1648 instead), and bears like map of Europe in the "the lute player" to the impression that the room is a real space in which people live.

It is possible that Vermeer, except in paintings, also acted in maps. He clearly had fun painting shape and texture maps; sometimes he changed the color of the card and the rod so that they formed a contrast with the figures in his paintings, or just better fit; in other cases he kept as closely as possible to the maps. The patterns and shades that made the cartographers in their images of land and sea, as a picture within a picture. Some of Vermeer's maps are shown sharper than others and are therefore more. The horizontal rods with their twisted buttons are on the ends different visual targets could, but very often he uses them as a sort of tie rod in buildings, in order to hold together parts of the painting. Where he eventually came to the conclusion that such a binding agent was unnecessary, he worked away, as in "Woman with pearl necklace," which we now know thanks to X-rays, which he initially painted a map of the Seventeen Provinces. The result is a daring amount of white wall, which he could show how well he could match Fabritius and bare plaster could imitate. Professor Montias noted that the vertical crease on the map in "The Painter Art more or less runs along the dividing line between the northern and southern provinces, but remains uncertain whether the crease is a political allusion of our painter, or just happened to be present in his copy of the card. Perhaps Vermeer wanted us to fold a thought that could be ironed out, as well, on a good day, the separate provinces -despite the current state of business again could be brought together. Perhaps he found the crease just beautiful and he painted for his own pleasure. The fact that he 'Woman with water jug ​​only depicts the southern provinces, is likely due to his compositional intentions than an expression of Catholic sympathies.' "
(Source: Anthony Bailey - View of Delft - A biography of Johannes Vermeer)​