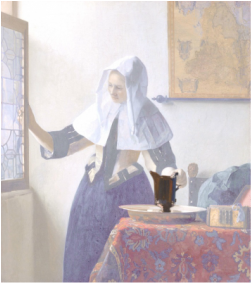 For the silver jug, I received some advice from Wim Nys, consultant team responsible for the collection and the analysis of the Silver Museum Province of Antwerp.
Thanx to him, I found this similar jug in the USA: 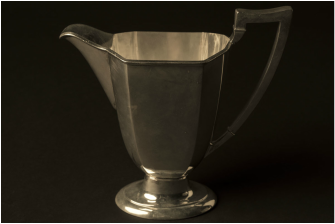 Unfortunately I still not found an appropriate basin/ bowl / to the can.
This water (or wine jug) is essential for this work.
On the internet you can read about the can in the painting "Woman with a Water Jug":

Missing will see the gilded wine jug on the "Woman can" at the Metropolitan, NYC.
A gilded wine jug with a matching gilded dish can be seen in the painting "Woman with water / wine jug" at the Metropolitan Museum of Art, New York City.
Michael Montias writes about it can:
"There is only one object using one of its wills donated by Maria Thins to her daughter Catherine, depicted in a Vermeer painting." [...] "A gold jug is such a special and precious object, I doubt whether such a thing could exist in the Vermeer household."

At my request, Michael Montias explained in 2003:
"I had written about the wine jug on p. 190 of the English edition of my book [Vermeer and his Milieu] That Maria Thins had've given to her daughter Catherine in 1657 and confirmed "in one of her covenant" (actually the second) in 1662, a "gilded wine tankard" (p. 317). In the Dutch edition, a much more complete version of the will is available. On p. 361, the text reads "1 gilt jug of wine. ''
Given the neat morning dress of the woman and her sober appearance there seems to be no reason to rename the painting "Morning Waken, wine drinking woman at the window, in need of some fresh air '
By 1676, the gold can could already be sold or transferred to the pawnshop because of financial problems in the Vermeer family since 1672. When the jug was still in the house he had illegally concealed the notary or his assistant.​

SOURCE
"Only one object Maria Thins poured into one of her testaments to her daughter Catherine, appears to be depicted in a painting by Vermeer. It is the gilded can on a platter of 'Woman with a Water Jug," which was just discussed. A gold plated can was so rare and expensive that I doubt there was a second house Thins. "
(Source: John Michael Mondigs - Vermeer and his environment, translated by Hans Bronkhorst)​