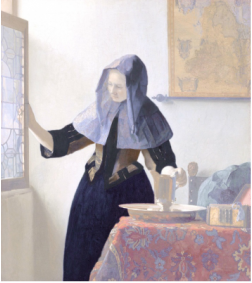 I can count on the cooperation of Hilde Van Bellingen on "De Juiste Maat" (in English: The Right Size) from Temse and the advice of Hilde Van Snick, teachers' Textile Arts "at the Academy of Fine Art (SASK) of Sint-Niklaas for a replica replica of the clothing of the woman in the painting.
As Vermeer expert Walter Liedtke eloquently wrote: The hands and the woman's forehead appear as if their anatomy were unknown. The vague shapes suggest slight movement and intensity of daylight compared with Vermeer's other women of 1660, she is a bit meaningless, partially accounts for its universal appeal.
She is an icon of domesticity, an elusive figure out the dream of a gentleman."
A similar white hood worn by the young woman in this painting also appears in four other paintings by Vermeer and a countless number of Dutch genre painting of the time, both tied as open.
This cap was partly ornamental and served to protect the capsule before and after changing.
The inventory of Vermeer's wife Catharina Bolnes, were listed three such caps; "Drye White caps", though it was called a headscarf in Delft.
It is usually made of white linen or sometimes cotton.